Five siblings, all haunted by the death of a brother in their youth. Twenty-four hours of the day when another of them will die.

Guddy is struggling to get to her sister. Jerry worries about his son, who may have embroiled himself in some dangerous real estate dealings in Vancouver. Annie looks after the family’s matriarch. Bjarne is living in the north after six years on Skid Row in Vancouver, unable to separate the realities of childhood and the present. Jean, their father, finds himself on a bench near Third Beach on the seawall, barefoot, carrying only a paper bag. And then there’s Therese, trying to forgive them all before her body ﬁnally betrays her. 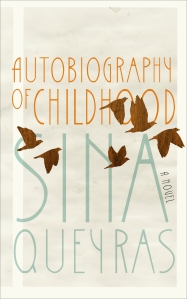 Autobiography of Childhood takes place over one day, moving through one sibling at a time. As each character is forced to react (or not react) to the news (or lack of news) of Therese’s rapidly progressing illness, their actions create a nuanced portrait of the individual characters and the pressures of their present lives.

What if thinking is what we have at the end of the day? The ﬁrst novel from acclaimed poet and critic Sina Queyras tells the story of childhood by recreating the mind at work grappling with it: noticing, reaching, loving and ﬂailing.

‘A family saga with the sweep of Ann-Marie MacDonald, the poetic depth of Anne Michaels and the tragedy and resilience of Alice Sebold’s The Lovely Bones.’ – Marilyn Bowering